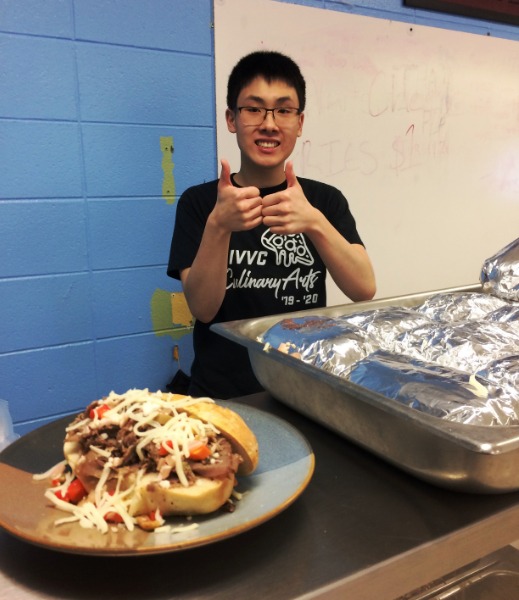 A recent unit in Culinary Arts was to create sandwiches. Students were encouraged to look up their favorite sandwiches from restaurants to find out just how healthy or unhealthy their sandwiches were.

Gabe O., a student from Hinckley Big Rock High School, always orders the pulled pork sandwich at Buffalo Wild Wings. Gabe was shocked to discover that the sandwich contained 4330mg of sodium which is 180% of one’s recommended daily intake of sodium. His goal was to recreate a healthier version of the sandwich. In order to make it healthier, Gabe chose to make a dry rub as well as the BBQ sauce from scratch. The dry rub consisted of Cajun seasoning, dry oregano, paprika, salt, and pepper. The BBQ sauce used ketchup, brown sugar, honey, red wine and apple cider vinegar, red pepper flakes, salt, and pepper. Gabe used the dry rub on the pork, seared the pork on the grill for color and flavor, then covered and cooked it in a liquid, low and slow. This method of cooking is called braising. The sandwich turned out to be delicious!

The quality of his product gave Gabe the confidence to face his fear of working on the buffet line. He wanted to overcome his fear and try something new. He would interact with the student customers, and Lily, another Culinary Arts student would help him. Lily was very supportive of Gabe and helped him stay on task, serving and talking about his sandwich to students in line. Gabe felt he did a good job and did not get too nervous or flustered. His teammates agreed! When asked how he felt about working on the buffet line, Gabe responded by saying, “I’m glad I worked on the line because I overcame my fear of talking to that many people and interacting with them. It gave me the chance to work on my sandwich and myself.”

At the end of the day, 43 of Gabe’s sandwiches were sold. People who ordered it loved it. In fact, one of his teachers at Hinckley Big Rock High School wrote him a thank you note for making such a scrumptious sandwich. Gabe was pleased with the support he received from his classmates and the positive feedback he received about his sandwich, saying “Positivity in a kitchen is a happy kitchen!”.