Computer Programming and Game Design: ½ a Year in Review 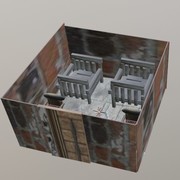 Since August, the Computer Programming/Game Design students have successfully accomplished the following:

As a class, students combined science, Styrofoam containers, and Excel to create a Venus flytrap garden. The students created graphs and charts to convert temperature differences. Venus flytraps grow, natively, in North Carolina. Every day, students compared the temperature of the plants to the natural environment in Carolina Beach, North Carolina. They also adjusted the calculations, in Excel, to include the hurricane that hit the lower east coast. On a larger scale, this same inexpensive method can be modified to grow other crops. What makes this invention different is that the plants grew with limited sunlight. The idea of replicating the environment rather than simply attempting to grow the plants took an extensive amount of research and programming.

Each student picked an issue based on Gallup polls. From this, they have created apps for safety that automatically alert police officers during suspicious activities during large gatherings, such as Sandwich Fest. Other apps have been linked to websites to assist families below the poverty line in an effort to reduce the unemployment. At conclusion of the year, these finished applications will range from education to environmental issues as well as genuine, functional applications to help solve issues that impact universal audiences.

Students have shown above proficiency with PowerShell. They have written codes that range from automatically disconnecting internet connections to running updates based on computer activities. We have been using C++ as a priority programming language and have created randomized number generators, loops, and basic games. EarSketch is an application that uses Javascript and Python. Students have created mashups, sound layering, and various combinations of the two. Essentially, we have been coding music.

In regards to 3D modeling, we have created interactive objects and scenes. There have been a lot of various creative object designs. These have ranged from mazes, portals hovering over Earth, and par-core courses. Students have been experimenting with scaling and combining the models to create scenes from movies to architectural houses. Numerous first year students have been given the opportunity to put these in action while working with Williams Architecture.

We finished the scenes as well as the objects and we have now implemented an element of a character from a first person point of view. Although we have not come to the final stages of completion, the pre-production phases have been completed. These have included scary story boards, pitches to potential buyers, and the early stages of development.